The third grade social studies curriculum in Massachusetts is mostly focused around the history of our state.  Collin enjoyed this study last year, and one thing he wanted to do was head to Boston to walk the Freedom Trail.  We planned this for yesterday, and left the house with every intention of doing the Freedom Trail.  Unfortunately, the weather did not cooperate.  While the Weather Channel app showed clear skies for the morning, the actual weather was quite different!  On the way there, we encountered heavy rains and thunder.  So, Tom came up with Plan B, and we all (Grandpa Jim and Grandma Susan, Collin, Reagan, Katelyn, Tom, and I) went to the Museum of Science.

We purchased tickets for the Dead Sea Scrolls exhibit and the Exploring the Universe Planetarium show.  Grandpa, Tom, Collin, and Reagan also went on the space exploration motion simulator. 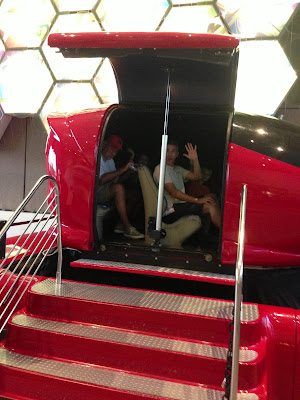 My only complaint about the Museum of Science is that additional tickets (at an additional price) are required for everything!

After some time there, we went to Faneuil Hall.  We walked around a bit trying to decide where to eat, and then we spotted Dick's Last Resort.  When we told the kids that it is a restaurant known for rude wait staff that makes fun of the customers, Collin and Reagan knew they wanted to eat there! 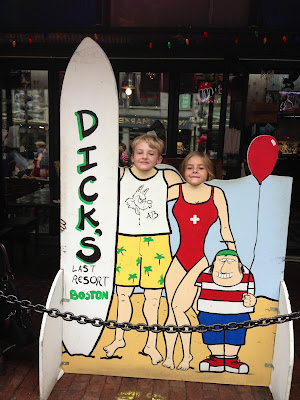 Reagan loved it, and wanted to participate in the worst way.  It's a good thing she got a hat, or she would have been devastated! 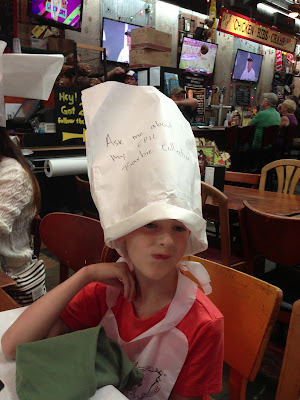 Collin's hat said, "Ask me about my EPIC Barbie collection". 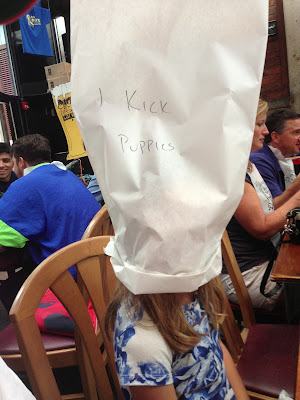 Reagan's hat said, "I kick puppies".
I can't say the food was good, but the experience was definitely memorable!!!

We walked around a little after lunch. 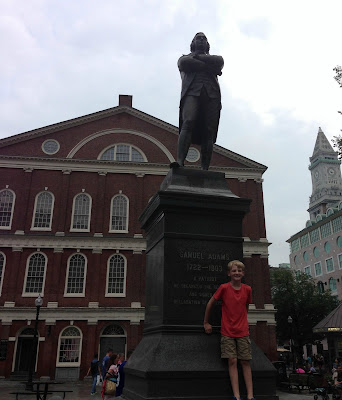 Collin posed in front of the Samuel Adams statue.

Reagan was hoping to visit the One Direction store, but it appears to have been a temporary shop, so we got ice cream instead (not that we wouldn't have got ice cream if we found the shop)! 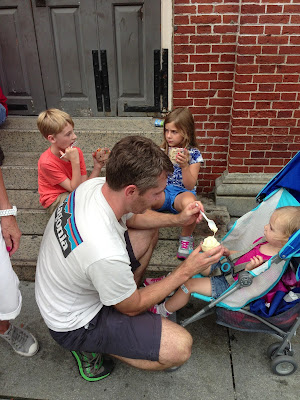 It has been about four years since we last visited Faneuil Hall, and yet we saw one of the same street performance acts that we saw last time - The Red Trouser Show. 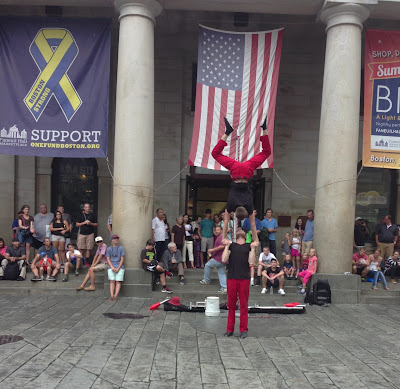 They perform a few acrobatic stunts during their show; it's fun for the kids to watch!  The last time we were there (May of 2009 - you can click here to read about that day), Reagan was a little over a year older than Kate is now, and Tom and I remember her rolling around on the ground while we watched the performance.  It was like deja vu with Kate yesterday as she rolled around on the ground!  After the show, we all headed home.

How fun to revisit the same places when the kids are older. Looks like your "Plan B" worked out well.

What fun.. I am with you.. I really dislike it when there are extra tickets in museum!

You live in a city that is jam packed with stuff to do..I can't wait to get my family out there again...and have some real fun with your fantastic family!