I always seem to find it easy to come up with special outing ideas for Reagan and I to do together, and struggle a little about what to do with the boys.  So I was thrilled when I received a post card from the Audubon Society about a special screening of Flying Monsters 3D.  I knew Collin would enjoy it, and he was very excited about having a special night for just the two of us.

Grandma watched the girls yesterday afternoon, and Collin and I went to the IMAX for this special event. 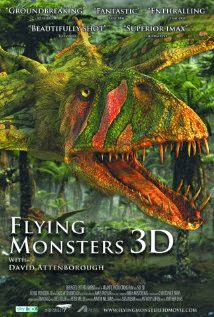 The film was very interesting.  I had never heard anything about pterosaurs before, so I learned quite a bit.  Collin mentioned that he thought the 3D aspects of the film were really good, and I have to agree. 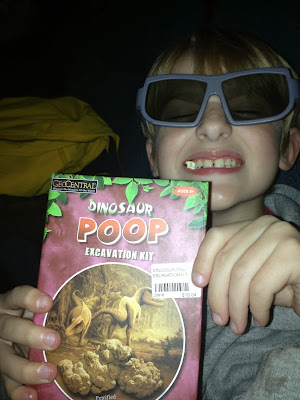 The Audubon Society had a table set up with different items for sale, and Collin chose this Dinosaur Poop Excavation Kit.  I knew he would pick that.

After the film, there was a screech owl presentation in the lobby. 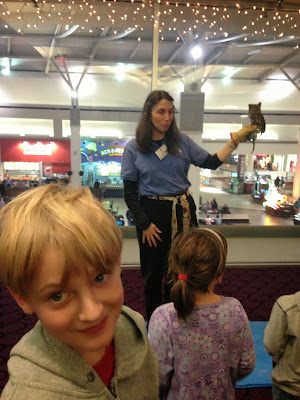 This owl's name is Odie and he was hit by a car when he was first learning to fly.  He is about six years old now, and is blind in one eye from the accident.

We had a great time out together!

Collin actually mentioned how happy he was that he had two special outings in just a few days.  On Saturday, Tom took him to the PC Friars basketball game!  I think it's so important to do things with each of the kids individually; I know they appreciate the one on one time!
Posted by Christy Killoran at 1:36 PM

What a fun outing!! Collin looks quite excited about his excavation kit!

That is an awesome idea! In fact, I am going to try and do something special with each of the kids before I have this baby! (I better hurry!)...and this is a fantastic idea! I am just like you...it is super easy to think of things to do with the girls...but my boys...it's a bit tougher! Thanks for the example!

The movie looks awesome - I can see Anna enjoying it too. I am glad Collin had fun!

That is so sweet that Collin appreciates his one-on-one time so much! My kids love it, too - and so do I as a parent!