Two of our four kids had special days yesterday!!!

Tyler and Tom went for lunch at Toby Keith's and then to the Patriots/Steelers game. 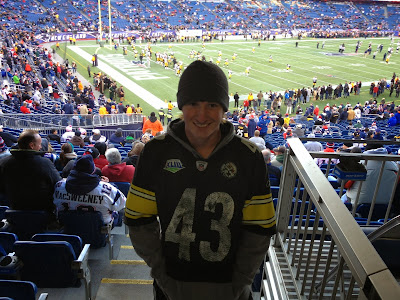 The Patriots won!  Tom is a Patriots fan, but Tyler likes the Steelers.  It was SO cold at the game, and even though we told Tyler it was going to be cold, he did not really dress appropriately, so he froze!

Reagan and I went to the Zeiterion to see Fancy Nancy the Musical. 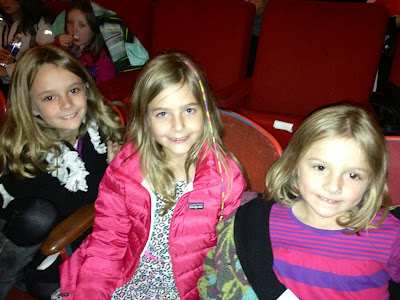 The show was about forty-five minutes long.  It was cute.  I thought it would have been much better if the roles of the children in the show were played by children instead of adults.  That's right, Fancy Nancy, her best friend Bree, and the three other children in the show were all played by adults.  It was a bit weird.  When I asked Reagan if she liked the show, she said it was in the middle for her.  We still had fun, and we went with Miranda, Madison, and Amy so that was extra special.

Collin and Kate stayed with Grandma while everyone else was out.  Don't worry, Collin and I have a special day coming up soon!
Posted by Christy Killoran at 8:23 AM

I'm trying to picture an adult playing Fancy Nancy...strange. Glad to read we're not the only ones having the "where is your coat?" conversation, though :)

I ABSOLUTLEY LOVE YOU AND YOUR FAMILY! I was telling Mark, how fun it is to have a friend who thinks like I do....(only better) ! :)
Mark and I were talking, yesterday, how we need to do a "BOYS" and "GIRLS" nights out! And then I go on your blog...and you have just done that! FANTASTIC!!!

I always get a little annoyed with shows that have adults pretending to be kids. Teens are okay, but adults...

That would be weird played that way. I wonder why they did that.... Probably child labor laws.

What fun special days! I always loved going to football games grown up (still do)!