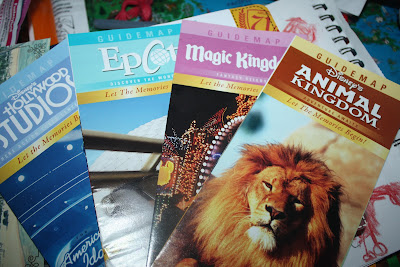 While we were on vacation, C really enjoyed studying the maps of the different Disney parks.  He spent quite a bit of time reading each map, and he saved one from each park as souvenirs. 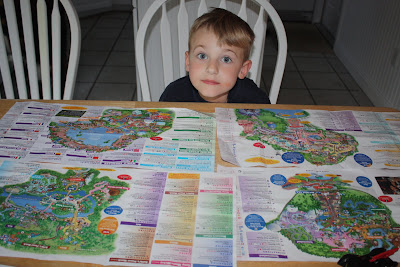 I thought it would be fun to let him draw his own map.  Of course, R wanted to make one too.  I gave them paper placemats 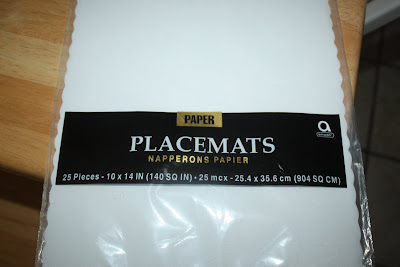 and told them they could draw maps of one of the Disney parks, or they could make up their own amusement park map.  They are still very much in Disney mode, and they both decided to make Disney maps. 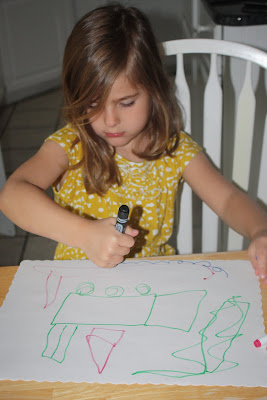 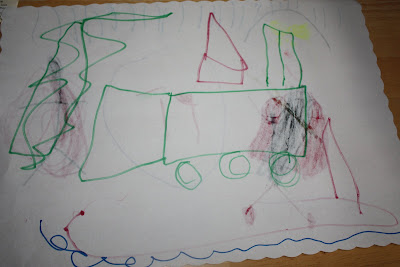 R made a map of Magic Kingdom.  Her favorite ride, Splash Mountain, is in the upper left corner.  She drew a train to represent Thunder Mountain (another of her favorite rides), the red house type structure is Cinderella's castle, and the water and red boat at the bottom represent the boat that took R, C, and Dad from Magic Kingdom back to the hotel.  On the back of her placemat, R drew Mickey Mouse (on the left) and Minnie Mouse. 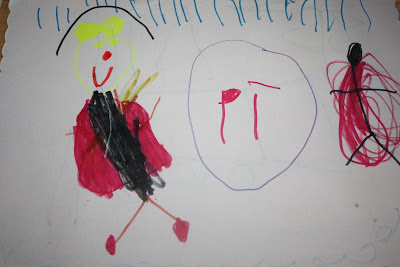 C made a map of Hollywood Studios. 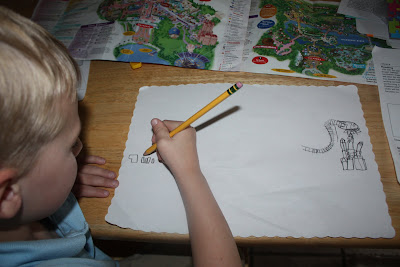 He drew a lot of details, including Toy Story Midway Mania, Tower of Terror, Rock 'n' Roll Roller Coaster (he went on this three times; I still can't believe it), the parade route, Mickey's sorcerer hat, and more. 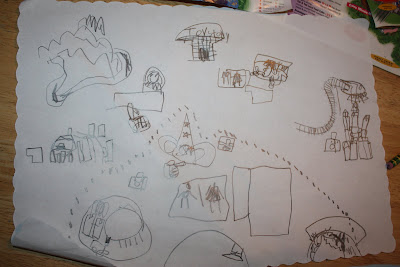 C and R both enjoyed this activity, and I enjoyed watching them work through the process of making the maps.
Posted by Christy Killoran at 6:27 AM

Y'all are just always learning in that house of yours, aren't ya? :0)

(Another fun idea for your little map makers would be to give them a shower curtain liner and some permanent markers to create a big map of your town...)

Love this activity! I really love the details they both included with some of their favorite things!

What a fun way to learn about maps, and record their favorite parts of the trip!

This is so neat. I love to see how R and C processed their visit. I think the maps should go into your Disney photo album if you are making one.

My boys are obsessed with the maps too. I've been thinking about doing a similar activity for a while, maybe I"ll actually do it now.

Love it! I always liked being in charge of the map and I still do!

My son also obsesses over maps wherever we go, even if it is just the local park!

I love this! This made me remember when I was in the 6th grade we were asked to use whatever materials we could find to create what we thought the World Fair should look like, that our city was hosting. That was a lot of fun!

Very cool!! Love all the details they included on their maps -- great work!

Their maps are cool! This is a good idea. On our Disney trip last year Joe was so into the maps. He got one for the park we were going to for the day each morning and carried it all.day.long. He brought home a huge load of them just like in your picture too. He still reads them sometimes at night, keeps them in his bedside table drawer :-).

I cannot believe C rode Rockin' Roller Coaster at all, let alone 3 times! I LOVE that ride! Hanna and I rode it over and over again b/c there was no wait. Sigh...Disney is a blast! We just booked our next trip for January--will be Jack's first, already looking forward to it!

What a fabulous teaching tool!!! You're awesome, you know that??!!

What a great idea! You always think of the best activities! =)