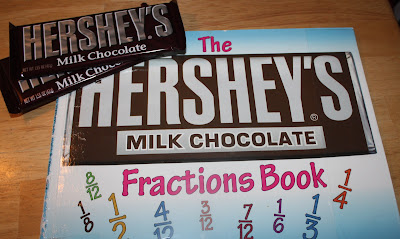 C has been learning fractions in school, so I couldn't resist borrowing The Hershey's Milk Chocolate Fractions Book by Jerry Pallotta from the library.

It's a little more advanced than the fractions he has learned so far, and it was all new to R, but they still had fun trying to figure out the math.  They each got their own Hershey bar out of the deal, so who could complain about the math?! 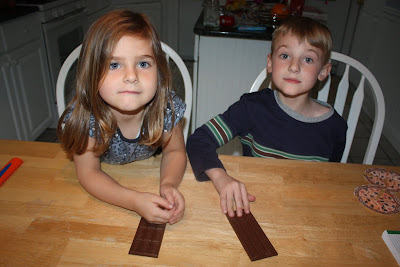 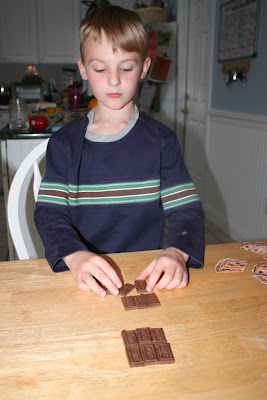 Their favorite part of the lesson, however, was when I told them what fraction of the candy bar they could eat.  I kept giving them fractions to eat until the candy bars were gone. 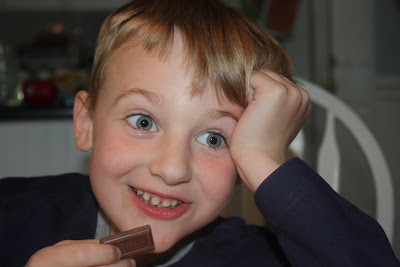 Thank you Ticia for the book recommendation!
Posted by Christy Killoran at 6:28 AM

Boy, if they only taught math this way when I was in school I would be such a failure at it!! LOL!

The grin on his face is about the same as my kids had :)

LOVE the expression on C's face in that last photo. Chocolate, yum! =)

I own that book but haven't used it. You just gave me an idea to make our own fraction chocolate with the chessboard mold we have. That way it can be dairy free! Our daughter will love it!

Yum. We've already did our fraction unit, but I think we will have to review. (just so Mom can have some chocolate)

Hope you are doing well!
Jen
Creative and Curious Kids!

I have this book on my list for when we get to this concept in Math.

You have another chance to win a Trip Clip and Activities for your kids! :)) Check it out!

Truly a delish way to learn about fractions!

Forget the kids...I want to review fractions for me. LOL

Man, I wish you were my math teacher when it was time to learn fractions!
http://littlewondersdays.blogspot.com/

So cute--we've seen these books at The Hershey Story museum in Hershey, PA and I've often thought of buying them...we have the M & Ms books, but this one is really adorable!

This last picture of C is hilarious - he looks so pleased. I have to keep this book in mind for later.

Oh, I would LOVE to have that book! Anything I can teach with chocolate would get big hoorays here :-).

This is the kind of fraction math my kids love!