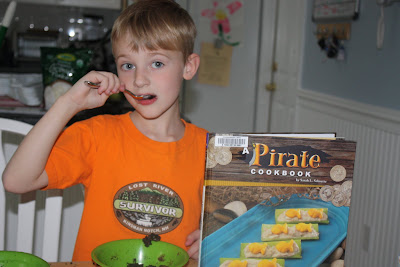 We have decided to work our way through some cookbooks for kids.  There are really no rules, except that we will choose cookbooks written with children in mind and make at least one recipe from each cookbook.  This is just for fun, and to give us an excuse to work together in the kitchen.

The first cookbook we chose is A Pirate Cookbook by Sarah L. Schuette.  There are seven recipes in this cookbook and they have cool names like "Scurvy Soup,"  "Peg-Leg Pickles," and "Sea Swords".  I love the idea of a pirate cookbook, but if I am going to purchase a cookbook, it has to have more than seven recipes.  It was fun to borrow the book from the library though, and some of the recipes would be fun for a pirate themed birthday party.

C chose a recipe called "Chocolate Gunpowder".  It is basically chocolate pudding, whipped cream, and crushed chocolate cookies.  He loved it!  R doesn't have much of a sweet tooth, so she gave her portion to C - he was thrilled! 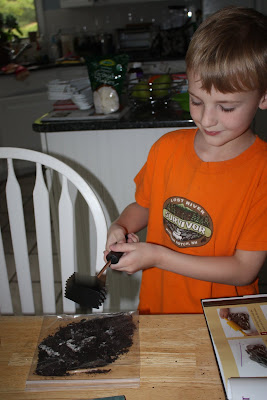 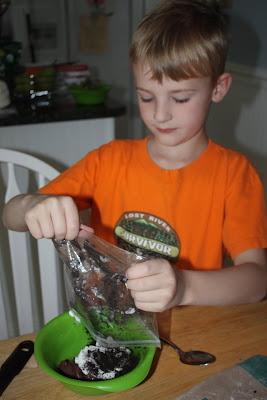 If you have a favorite cookbook for kids, let me know in a comment.

Posted by Christy Killoran at 6:26 AM

We like the Dr Seuss Cookbook- it gives you all kinds of recipes for things found in his books.... like moose juice and goose juice.... etc. :).

This is going to be a fun series to see reviewed. I have to admit I haven't gotten any kid cookbooks yet......

Oh, that reminds me we're going to make cookies today.

We have enjoyed "The Science Chef" some of the recipes are pretty good.

My oldest two would like to start cooking more, so we'll be looking into "cooking 101" type books this summer, too.

Seven recipes is a section, not an entire hardback book! :) It is rather clever, esp for those parents who hesitate to encourage their sons to cook.

We have two similar cookbooks (both gifts) for kids...I haven't used them yet though.

Fun! We just had a similar thought the other day and ordered up the Star Wars cook book. Now we are looking forward to making Wookie Cookies.

This will be fun to follow, and take notes on what you recommend as good kids cookbooks!

Looks like a fun recipe for the gunpowder...But yeah, I'm with you on not wanting to buy a cookbook with only 7 recipes. But it sounds like a fun book regardless and my boys love piratey stuff, so I may have to see if I can find this at the library.

I've only seen one or two cookbooks for kids, I think one was a pirate one, but different than this one and the other was related to an American Girl doll, can't remember which one now.

Can't wait to see what other cookbooks you come up with though, should be interesting!!

Some of the ones that I have liked the most and that my daughter was most drawn to were:
Eat It Up! lip-smacking recipes for kids by Elisabeth De Mariaffi (nice photos plus fun animated characters and a good range of dishes)
Paula Deen's cookbook for the lunch-box set by Paula Deen(I especially liked that there were food gift ideas in this one. no photos just drawn pictures but I don't mind that too much)

Fun! There is a fairy and princess cookbook at the library Abby likes. Let me go find a link...

We have 2 cookbook for kids - Paula Deen Cooking with Kids and one of Sesame Street ones, but we haven't really tried them yet. I am looking forward to your cookbook review.

My kids love to cook! They have requested more of it this summer! I will have to check this book!

This is a fun, all boy recipe! Joe would love this treat and this book.

Definitely agree with you though on the amount of recipes in this book.