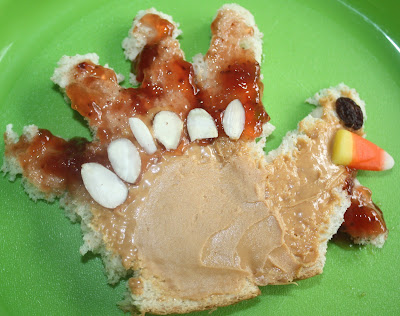 I have mentioned before that I love hand print crafts and hand print turkeys.  This week, I combined the two for a special turkey sandwich.

First, I traced R's hand on paper and cut it out.  Then, I discovered that our bread is too small to fit R's hand, so I cut off some crust and used a little peanut butter to connect two slices of bread. 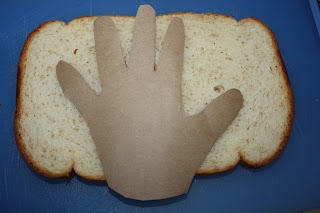 Then, I carefully cut her hand print out of the bread slices.  I covered the palm (body) and thumb (head/neck) with peanut butter.  The four fingers became feathers when I covered them with strawberry Polaner All Fruit.  I also added some almond slices for feathers to the body.  A raisin became the eye and a candy corn became the beak.  I was stumped when it came to the snood, but I eventually just took a small piece of the leftover bread and put some strawberry All Fruit on it. 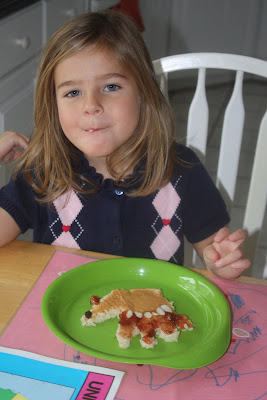 R gobble gobbled it up and asked for another!
Posted by Christy Killoran at 6:32 AM

This is cute too! I wonder how many different "turkey sandwich" variations there are?

That is cute! How fun!

This is so cute!

Perfect and so much fun!!

That is way too cute! It's a shame my kids won't eat jelly.

Really cute. It's also nice when they enjoy it so much they ask for more!

I love it! I've been trying to think of different foods that we could make into turkey's. I actually hadn't thought of anything yet! LOL YOu are so good!