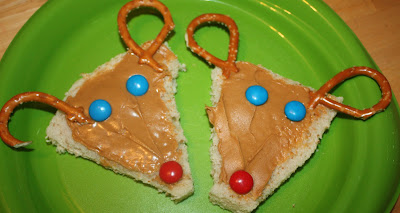 It has become a tradition now (this is our third year) to have reindeer sandwiches at least once during the month of December.  They are so easy to make that I can never say no when the kids ask for them.  We just cut the bread into triangles, spread some peanut butter, add pretzel antlers, and finish them with chocolate covered candy eyes and a candy nose. 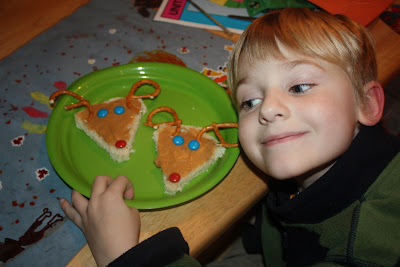 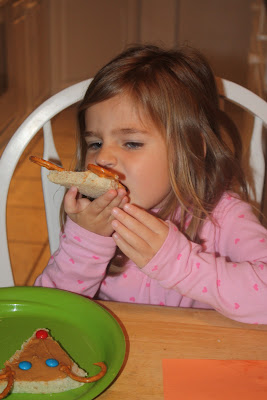 This year, I could not resist trying to make a marshmallow reindeer.  I seem to be on a marshmallow kick lately; remember the Halloween marshmallows and the Pilgrim hat marshmallows?  So this is what I came up with: 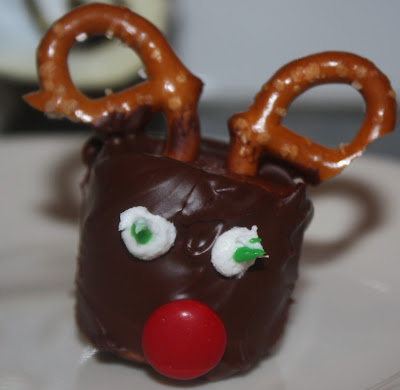 R does not like marshmallows, so I had to make her a special reindeer sweet too.  I just put some melted chocolate on wax paper, stuck some pretzel antlers in that, added a red candy nose and put it in the fridge for a few minutes.  Then I added the icing eyes, just like on the marshmallow. 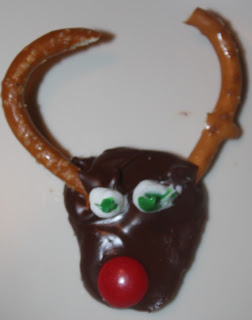 They certainly aren't perfect, but C and R were delighted with their reindeer treats!
Posted by Christy Killoran at 6:28 AM

Fun! The sandwiches look so cute. I bet my crew would love them.

Those turned out really cute - I love the marshmallow, and non-marshmallow alternative!

I'm going to try those sandwiches today. Thanks for posting it. Would it be a problem to serve those for breakfast?! Ha! I'm too excited.

Very cute! I did Pilgrim hats too for Thanksgiving and, amazingly, Anna wouldn't eat them. She said that she doesn't like big marshmallows in chocolate - go figure. She loves small marshmallows and adores chocolate, but apparently not together. I might try reindeer sandwiches too.

So cute!
I love both of them!

your kids get the best snacks!

So cute! This reminds me that I forgot to get peanut butter today.

Those are so cute and look so yummy!

Both of them turned out super cute and lots of fun.

I think these are delightful little edible treats. :-)

too cute! i'm definitely doing the sandwiches for lunch today!